Failure is one of the most normal things in business, science and engineering. Yet in life, it brings us down, tears us apart and makes us negative towards others. Why?

Failing sucks, right? I’ve been fired from a job, crashed a car and flunked numerous exams.

If I listed all my failures, you would probably wonder why you are reading a blog from such a pathetic person.  However, I would guess the same would be true when looking at some of the most successful people in the world.

If you looked at the shots Michael Jordan missed, the number of races Lewis Hamilton hasn’t won or even the number of times Elon Musk’s SpaceX rockets crashed, you would probably think they were losers too. But in most cases failure is good – Why? Because nothing teaches you more about how something works than when something fails.

If a vehicle manufacturer wants to know how far a car can drive, they put it through a durability cycle and literally drive it until things break. When they break, then they are logged and the engineers can correlate whether their calculations were correct or not. They learn only in the moment of failure.

When something fails in engineering, we look at it, analyse it and ask the question, why did it fail?

In answering that question, then we make sure it doesn’t happen again and the product gets better.

You look at what is not good, constantly, and work on those things to make it work. The PDCA cycle is a great example of this.

The difficulty arises when you become so focussed and so conditioned on looking at the failures or the negatives, that you don’t have time to stand back and look at the successes.

As a ‘detail-driven’ person, it took me well over two years living in the house I built to stop looking at the small mistakes, the pieces of wood I didn’t cut right or the slight error in production of some things. To stand back and see the house as a whole end result and form a different opinion.

This conditioning of always looking at the negatives and seeing failures more than successes was really a contributing factor to my struggle in life. At work, projects have defined timelines and new ones are always coming along to keep you distracted from the one that has just gone by. If you messed up on a project three years ago, chances are you’ve already chalked it off and moved on to the next. The longer timeline helps you in these cases.

But in life, it seems to be harder. Sometimes, like me, we will look back on things that happened three years ago and still feel pain, regret or sadness.

When we focus on the failures, we tend to miss what else is going on. Just like a plot of the FTSE 100 where the failures like the 2008 financial crisis are just blips in the road to a constantly increasing chart.

In 2017 my wife and I thought about starting a house build project. We found a company to deliver the materials and we knew a builder who would be the project manager and oversee the construction. He was a long-term friend of my wifes brother and his family lived only 100m away from the building plot.  If you were going to trust anyone in a foreign country with your hard-earned cash, he was up there high on the list.

Our assumption though, could not have been any worse as in 2018, this very same person had walked off with £130,000 of our money and left us with only a bare strip of ground.

Trusting this guy and just paying him money without checking, questioning or vetting was by far the biggest failure in my life. It put me back years in my plan with regards to integrating to Norway, my career and my finances and was a huge contributing factor to my breakdown.

That failure though, looking back from a far, was actually quite a good thing to happen to me. If that guy had not done what he did to us, things would not be as good as they are now.

You might ask, how can someone come into your life, rip it to parts, drink champagne each weekend in the local bar on your money and that has possibly been a good thing that happened to you?

Well, in engineering, failure has three beneficial results and the same three things we should all learn from for life too.

Teaches you a lesson / you learn something

I grew up in the North of England. Raised to be polite and respectful, especially to ‘elders’, I trusted everyone. Looking back now, perhaps a bit too much. I thought that no one would do bad things to intentionally hurt you. Unsurprisingly after being conned, guess what? I learnt that wasn’t the case. Perhaps I’d been a bit naive, but it’s only natural to judge others by your own standards and I don’t consider honesty a character flaw.

We’ll never know if this chap was a bad egg or a good person or simply in a desperate situation making a very poor decision. Yet, learning and accepting that good and bad people can do bad things, that no matter how nice, how friendly, how much they belong to  a group of friends, if the opportunity or circumstance presents itself, you can leave yourself open to being taken advantage of.

As I move more into a more entrepreneurial role— with my side hustle and this blog—dealing with contracts and paperwork has become quite a common thing. I need to be quite savvy when it comes to removing the person and looking at the facts, figures and the risks. After that guy made me curl up in my bed and cry my eyes out each night for well over a half a year, I check and recheck every line of paperwork and conduct background checks on the people themselves.

These lessons, learnt the hard way, have helped me in two other cases since our misfortune. I could have lost a lot of money if I hadn’t gone through this horrible experience. I have evolved into a new version of me, only through the pain of failure.

Stops you heading down a wrong path

An idea is a brilliant thing right? It’s something that comes into your mind and then blossoms into something beautiful. However not all ideas turn out great. The use of hydrogen in airships was thought to be quite good, until of course that disastrous day resulting in the loss of life with the LZ 129 Hindenburg.

When the con man came and went, at that point in my career, I had lost sight of engineering. I had been seduced by the world of sales and thought this would be a good new start for me. I had moved to Norway and maybe a different role in a different country was what I was supposed to be doing. I worked with the con man creating house build projects that we could build and sell. One week, I had believed in everything this man had to say that I was ready to quit my job and go and work on this marvelous future venture with him. In that very same week, we found out from another builder that everything he had been telling us was complete lies and we really ought to go and get a lawyer. I retracted my thought of resignation and luckily the two events happened in the right order.

Ultimately the whole ordeal led me to go back to engineering and kept it firmly in place as my head focus in life. This blog would not be being written if I had headed down the path of being a full time salesperson. That path was closed by failure. Looking back, it was the right decision.

Provides you or others with information

When a new thing comes to market, there is a distribution curve on who will buy this fancy new product. It’s a well-documented idea and can be implemented on who will buy a product, who will pick up and idea, or who will even wear a radically new design of dress. This theory is called the ‘Diffusion of Innovations’ by Everett Rogers.

Upon release, individuals called the ‘Innovators’ will be the first to pick it up. They take the risk, experience the new fancy thing first—whether it works or not. Then the ‘early adopters’ then come the ‘early majority’. By now,some of the risk has been removed by the ‘innovators’. Finally the ‘late majority’ and the ‘laggards’ who have watched everyone else test this new product and proved its success, will pick it up and buy it. 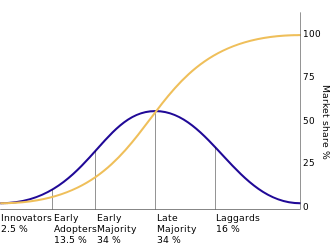 By my wife and I failing, our whole community found out that this guy was a con man. People that would have used him to complete jobs now understood him as a crook and did not. We saved them from potential pain and upset. We were the (unfortunate) ‘innovators’ that gave the information to the rest of the people.

The friend circle that this guy was in, thought he was an OK guy. Our big failure opened the box which exposed this guy to the world. People who had been caught up in his lies and cheats suddenly realised he was pulling the rug from underneath them. They managed to jump before themselves would fall.

Much like watching a component failing on a competitor’s product and that giving you information to be better yourselves. Our failure helped our community cast off a bad apple and ensured no one was hurt like this again.

My regret looking back on this whole thing was how I reacted at the time. In our group of friends, I would moan, send messages and probably bring peoples spirits down with the negativity of ‘why me?’.

People’s views on me changed through this process and they saw me moaning and complaining about what this horrible man did to us. I could see the once smiling people welcoming me to a party or an event, would soon scurry away, not wanting to have their energy reduced by our tales of woe.

But from the outside looking in, the situation was one that I didn’t check, therefore it’s kinda my fault, right?

I wish I only knew about life’s failure and the benefits to them beforehand. In those times I didn’t have anyone to guide me, to be a mentor, or to stand by my side and teach me the things that I’m sharing with you now. I wish I took each day as it came and had a clear enough mind to say ‘hey, this has happened, ok there will be positives in the future, just keep moving forwards’.

When you fail, or if you are looking back on a failure, I would suggest you maybe look at these 3 points and see how actually that failure helped or is helping you. You may not see it directly in the moment of failure, but a little down the road then it may become clearer.

A quote I heard recently, about the story of Brian Banks. The football player was wrongly imprisoned for a crime he didn’t commit. His mentor, Jerome Johnson said. . .

“All you can control in life is how you respond to life [itself].”

Failure is normal and sure enough it will happen. Just like a plot of the FSTE 100, you will still keep moving forwards and eventually the chart will be higher than before. You just need to react the best you can when failure happens.

Try sitting down and look back on your life at your biggest ‘failure’. Then try to understand why it happened and how now you are a better person for it. Send me a mail if you find this to be a positive experience.